The Florilegium at the Royal Botanic Garden Sydney

By Dianne Sutherland for the Botanical Artists Facebook Group
In this first of a new series of articles by the Botanical Artists' Facebook Group, we asked Beverly Allen, President of the Florilegium Society at the Royal Botanic Garden Sydney about the Society. She very kindly provided us with information about their projects to date and images from their beautiful new publication 'Botanic Endeavour'. 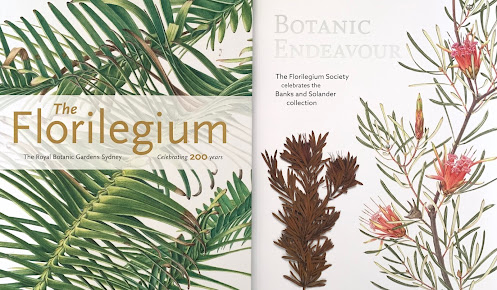 About the Florilegium Society at the Royal Botanic Garden Sydney
The Florilegium Society at the Royal Botanic Garden Sydney, was formed in 2005 to create a collection of contemporary botanical paintings of plants in the living collections of the Royal Botanic Gardens and Domain Trust, this self-funded society is endorsed by the Trust and relies on the hard work and enthusiasm work of volunteers with a passion for botanical art.
Original paintings and the copyright are gifted by participating artists to the Trust, which is held in the Daniel Solander Library in the National Herbarium of New South Wales - the oldest botanical research library in Australia, which holds one of the most important collections of botanical and horticultural reference, from Dioscorides’ De Materia Medica (1150) to Robert Brown’s Prodromus Florae Novae Hollandiae et Insulae Van Diemen (1810) and from Ferdinand Bauer’s Illustrationes Florae Novae Hollandae (1813) to Banks’ Florilegium (1980–1990) and Rosser and George’s The Banksias (1981).


'Florilegium’, simply means a gathering of flowers, from the Latin flos (flower) and leger (to gather), it was first used in 1590 to describe a publication that focused on the beauty of plants rather than their medicinal value. Florilegia flourished from the seventeenth century to the late nineteenth century, during which time they portrayed collections of rare and exotic plants. The worldwide resurgence in botanical painting over the last 40 years has resulted in the creation of many fine contemporary florilegia. Contemporary botanical art spans a wide range of styles and intentions, from scientific botanical illustration through to plant ‘portraits’; describing and celebrating the design and beauty of plants with a precision and level of detail sufficient for the subject to be identified.

The Artists
Botanical artists are invited to participate in the Florilegium, to date 75 artists from several countries have now participated in two major projects. Their works record plants in gardens of both botanical and historic significance or highlight the diversity of the countries native flora, including plants that are now rare and endangered.
Artists are provided with detailed plant lists to choose from along with contacts at each garden or site where the plants specimens can be sourced, this collaboration with gardens ensures provenance for the specimens. The paintings depict plants at life-size unless noted otherwise on the painting. The specified medium is watercolour on archival quality paper, paints used must have the best colourfastness ASTM I or II. Artists work to specific sizes for the finished works, either landscape or portrait and this works well for continuity within the collection and for exhibition purposes. Each artists' approach varies somewhat, some show the plant in its entirety while others focus on a specific aspect, sometimes habitat and fine morphological detail are included. The artist biographies are included in the publications and reveal a wide range of artistic endeavour and a variety of professions. Thus far the Florilegium Society have produced two publications and organised two exhibitions, the second exhibition is currently on hold due to Covid19. The see the list detailing full collection of 134 works and for participating artists click here.

The PROJECTS: The Collection, Exhibitions and Publications

The Society’s first project came to fruition in 2016 and marked the bicentenary of the Royal Botanic Garden Sydney with 89 paintings donated to the Trust. Florilegium: Royal Botanic Gardens Sydney: Celebrating 200 Years was published. It provided a historical overview of the Gardens, and each colour plate was accompanied by the plant description and text relating it the history of the Gardens. The publication accompanied the exhibition of works.
The Exhibition, Sydney
Sydney Living Museums held a major exhibition of the 89 works, titled,  Florilegium: Sydney’s Painted Garden – at the Museum of Sydney from April to September 2016, attracting over 30,000 visitors. It explored the botanical and horticultural development of the Gardens and its influence on private gardens, public parks and landscapes of New South Wales since 1816. The exhibition and book were awarded the 2017 Heritage Award for Events and Publications by the National Trust of Australia (NSW). Click here for more information on the exhibition.


The Second Project: Celebrating the Banks and Solander Collection (2020)
The most recent project focuses on the historic collections by Joseph Banks and Daniel Solander and coincides with the 250th anniversary of the voyage of the Endeavour, when plant samples were first collected and illustrated by Sydney Parkinson alongside fellow landscape artist by Alexander Buchan and draftsman Herman Spöring.
The Endeavour arrived at the southeast tip of Australia and sailed along the coast in 1770, the crew made  many land excursions including Botany Bay, which was so named because of the sheer number of plants there.
To paint from life is the ideal for botanical painters and illustrators but the transient nature of plants is both an inspiration and a challenge for the artist. It's hard to imagine the overwhelming challenge faced by Sydney Parkinson during the voyage, he painted more than 400 sketches of subjects while the ship was in Australian waters alone and completed 925 sketches in total of which 676 were unfinished often working into the night by candlelight. Buchan died early in the voyage at The Society Islands, which increased Parkinson's workload. To read more about the works from the whole voyage and artists who completed the final works visit the Natural History Museum, where you can also view the surviving artwork from the collection. Sadly Sydney Parkinson never got to finish the project and like many on the voyage, he and Spöring died of dysentery off the Coast of Java on the return journey.
The Sydney Florilegium project revisits subjects from the Banks and Solander collection with 45  new paintings created by contemporary botanical artists. These new paintings are intended to draw attention to the collections by Banks and Solander and to the digitization program currently underway that will make the 1.4 million specimens in the Herbarium available to everyone one the Gardens website.
The majority of the Banks and Solander specimens represented in the new works were collected at Botany Bay and the remainder from several locations in Queensland. Fresh plant material was sourced in many ways; with the co-operation of the botanic gardens in Cambridge, Oxford and Kew in the UK and a specialist nursery in California as well as from the three Gardens of the Trust in Australia. One artist sourced seeds from Western Australia and grew them in Cambridge; another painted from plants on the Amahlongwana River in KwaZulu-Natal, South Africa. In Australia, some material was obtained from specialist nurseries and grown on at home; naturally, many grow in Sydney and the areas of collection in Queensland.
For my own involvement I travelled to the Mount Annan Botanic Garden twice, to paint Erythina vespertilio and was assisted with samples of seed pods, the first occasion when the tree was not in flower, although I did find it at other locations in the north. I captured the plant the second time around the following year while visiting Sydney.

As you can see each illustration sits alongside the newly digitised herbarium images in this beautiful new publication. Below, you can see a small collection of images from the new book showing the double page spreads.

The Exhibition: Celebrating the Banks and Solander Collection
The exhibition was due to take place at the Lion Gate Lodge at the Royal Botanic Garden, Sydney from 25 April to 17 May 2020.  Preparations were well underway for the hang when the Covid 19 global pandemic began, so the exhibition is currently on hold, despite the lockdown the Society managed to finish the publication which is now available. There are just 600 copies available, see information in this link to purchase the book
https://www.rbgsyd.nsw.gov.au/getattachment/Science/Botanical-Illustration/The-Florilegium/Botanic-Endeavour-book-flyer.pdf.aspx?lang=en-AU
Many thanks to Beverly Allen,  President of The Florilegium Society at the Royal Botanic Gardens Sydney for providing images and information for this article, all artwork copyright belongs to the Florilegium.

Wonderful to read more about the Florilegium. The exhibition at the Shirley Sherwood Gallery was one of the best botanical art exhibitions I had ever seen. Went back several times! The books are excellent too and ones I will treasure. Thanks for a great blog post.

I think that having a blog about the exhibition is a brilliant idea.
I spent many happy hours in forests of black bean trees gathering information and samples of the fruits and flowers to work on for my painting.

This blog was created for all botanical artists. After starting a very enthusiastic group on Facebook and a huge group on Flickr we wanted to add even more possibilities for artists to share their love for botanical art. Please read the rules of this blog and to find out how you can join our groups on Facebook and Flickr.

Sigrid Frensen and Dianne Sutherland Ball, administrators of this blog.

Get this widget at roytanck.com